TREND REPORT: Demand for Virtual Studios up 90% YoY since pandemic 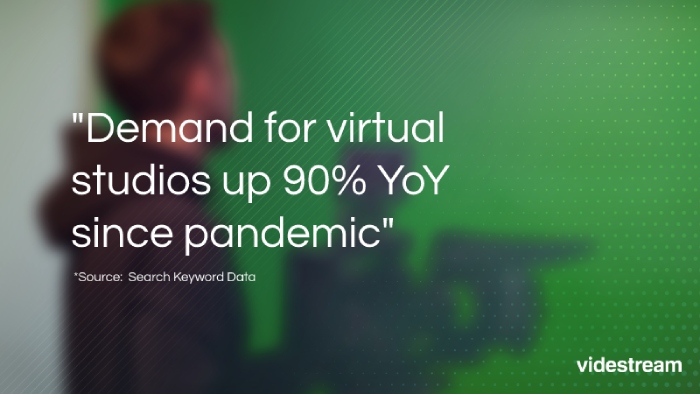 The demand for virtual studios has increased exponentially since March 2020, with companies and broadcasters looking to shift to a virtual production due to ongoing restrictions. Historic analysis of the keyword ‘virtual studio’ shows that search volume is up 90% YoY since March 2020, a report by Videstream has found.

Hundreds of other keywords were analysed in order to track demand and interest around the topic. According to the report, during the period from March to December 2019 there were a total of 69,300 searches on Google for ‘Virtual Studio’. In the same period for 2020 this increased 90% to a total of 132,300 searches.

The surge in growth for virtual studios, like the pandemic, is a worldwide phenomenon, but five countries make up almost 35% of the demand, with searches from the United States equating to just over 11% of total volume.

Videstream spoke to Moov.tv, a leading graphics & virtual studio production company in the UK, to find out their thoughts on the growth of the market.

Mike Phillipson COO of Moov.tv stated, “The COVID pandemic has meant that broadcasters have had to create a safer working environment for talent, and virtual studios have been able to help that with the tools that are on offer”.

“The demand for virtual studios has been rising in the last few years for a number of factors. With the technologies improving all of the time and the output quality of virtual engines being photorealistic, the opportunities for clients to create something special and memorable are vast. Tied in with the improvements around keying, which is the integral part of virtual solutions, virtual studios are starting to become the norm.”

“We’ve seen that Covid-19 has accelerated this move, with a broader group, rather than just opinion leaders, now embracing it, because they have had to focus on working remotely, so have become more comfortable with it. Also though, it needs to be said, a lot of the revolution is because of gaming technology. That has also helped drive the changes we are seeing now, where uniting the digital and physical worlds has been a top priority for them. So their learnings and technology have filtered through to the new breed of filmmakers, broadcasters and the world of media – and have helped empower them.”

And what this acceleration means for the industry, Mike said, “Inevitably the business model of pre-production, shoot and post-production is changing as broadcast technology like VR is used more up front in the model, not just for aesthetic and practical reasons, but cost reasons also. And as they become more sophisticated, whilst keeping the costs lower, broadcaster and media companies will only become more virtual in the future, rather than less, vs live.”

“The race is on to be more sophisticated and as a result more ‘real’ – so I think we will see advancements in things like graphics cards, like real-time raytracing to increase the quality. I think AI will develop also, not just in content creation for action simulation, three-dimensional texturing and post-process motion-capturing data, leading to more advanced visual effect software functions, but with virtual film or production crews being a real possibility one day too.”