TVU Networks, the market and technology leader in cloud and IP-based live video solutions, has announced that visionary Barcelona broadcaster betevé will use TVU RPS, a remote production system for live synchronized multi-camera production, for broadcast and streaming coverage of the Grec 2020 Festival of Barcelona. This marks the first time that the festival’s events will be broadcast and streamed live. Events will be broadcast live on betevé, the city’s public broadcasting service, as well as streamed live on the network’s website. 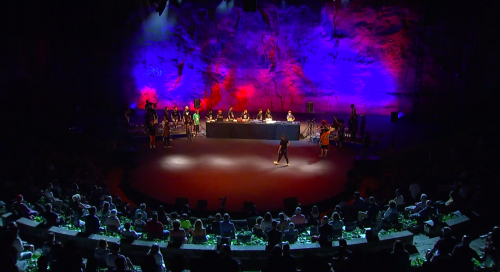 The annual Grec 2020 is a month-long cultural and arts festival that uses different locales throughout the city for an exhibition of music, dance, art, and theatre.

With roughly 50 shows for live broadcast, producers at betevé searched for a technical partner that would help solve their technical challenges and specify a cost-effective remote production solution that would allow them to cover multiple live shoots from varying locales while producing from the station’s studio

betevé turned to a premier technical and production service provider, Sobatech Group SL, for guidance.”Sobatech developed an innovative set up that addressed all social distancing requirements in a cost-effective package,” said Jordi Colom, Technical Director, betevé. “It’s based on TVU RPS which consists of an encoder and decoder that provides frame accurate, multi-channel remote production over public Internet – using our existing studio and staff. We’re effectively reducing costs and the number of staff required on location while providing high quality transmission from locations throughout the city.”

The COVID-19 pandemic presented new challenges for festival organizers – from closed theatres and shuttered shows to socially distant TV production requirements. “Given all the physical restrictions, we had to find entirely new ways to engage audiences at-home,” said Xavier Soler, Sobatech Group Manager, Sobatech Group SL, “For the first time, the majority of the performances are broadcast and streamed live; and all remote video production is done by small crews safely. People who’d never been to an event before or live far from Barcelona are engaging online or watching live.”

Sobatech is providing a reduced crew of camera operators and video engineers on site at each location. A small OB van with several studio and PTZ cameras records the video locally at each event and encodes it using the TVU RPS transmitter. The TVU RPS transmitter sends IP video from the remote location to a TVU RPS receiver at betevé’s Studio 1 – the host studio. A small betevé staff produces the live broadcast from Studio 1. The TVU RPS receiver decodes the synchronized SDI outputs and broadcasts them on betevé and streams to the network’s web site.

Video delays for the Grec 2020 live feeds are reported at approximately 0.8s at 15Mbps/feed.

“With its low latency and real-time two-way communication, TVU RPS allows the betevé and Sobatech teams to communicate as though they’re producing in real-time, together in Studio 1,” said Rafael Castillo, General Manager/Vice President of Europe and Latin America. “TVU RPS was designed from the start for remote production in a collaborative environment with multiple cameras. This production model allows for perfect multi-channel synchronization to any centralized production studio, which is well suited for today’s social distancing requirements.”

For a live video showing the production of live events during Grec 2020 by betevé and Sobatech, please click the link here.