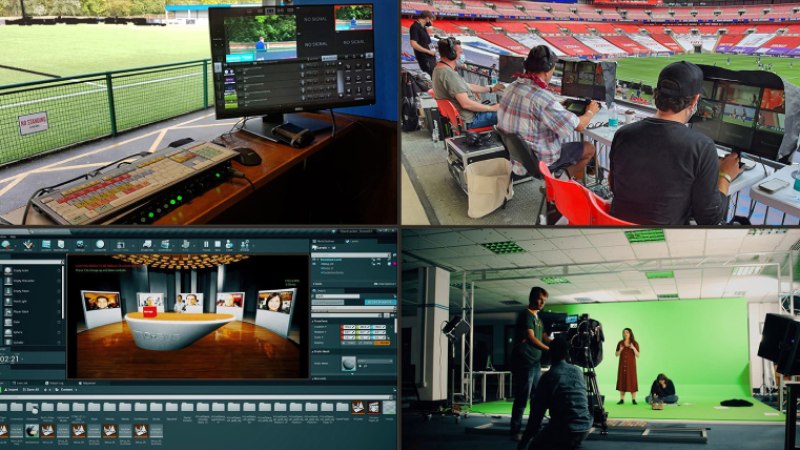 “StreamSmart+ is a complete glass-to-glass solution including latest-generation equipment, fully focused operational training and all relevant supporting services,” says CJP Broadcast MD Chris Phillips. “Operating an online TV channel allows sports clubs to extend their visibility both locally and globally. It is also a potential revenue source both for clubs and their sponsors. Unlike free to air services such as YouTube, a properly managed online TV channel retains full control over all its content, independent of commercials that might otherwise compete with sponsors’ brands.”

“The service is based on nearly 10 years of experience which we have gained as an internationally active television systems integrator working within sports production. That includes partnering with various sports organisations from grassroots level up to major event finals across football, cricket and rugby.”

“Key requirements addressed by StreamSmart+ are affordability, easy operation, high-quality image capture, eye-friendly titling and effects, and high quality internet-based transmission. The live production hardware is fully tried and tested, compact and transportable, easy to install onsite and controllable via an intuitive touchscreen. Optional elements include manual or robotic cameras, ruggedised and portable live production and virtual reality graphics. Remote guests can be beamed into a studio production as if they are actually on set. All with robust live streaming, either as a standalone pay-per-view channel or on a subscription basis within a video-on-demand service with paywall. Efficient, tightly integrated and totally reliable.”

Each online paywall service is scaled and branded to the club’s or organisation’s precise needs. CJP also offers full training and system support in every aspect of the operation from production to content managements, to help each club establish a capable in-house operating team.
In the first three months of the 2020/21 football calendar alone, CJP Broadcast deployed elements of this solution to generate over £150,000 of new revenue for clubs in Tier 6 of the Football League. This is anticipated to increase to £500,000 for the season. 88% of generated revenue goes directly to the club after paywall and streaming costs. This means clubs with as little as 350 season ticket holders can benefit. Clubs with 1,000 fans or more can see full return on investment within just a few games.

“The challenge for clubs is that they know football, turnstiles and merchandise shop sales,” Chris Phillips summarises. “Moving to an online global platform is not written into the genetics of the lower league clubs so is rarely considered as viable by the club owners. Given the challenges Covid-19 presented in 2020 and may do in the future, StreamSmart+ opens up the opportunity for clubs to own and operate VOD and live streaming pay-per-view services, even at the lower echelons of sports.”